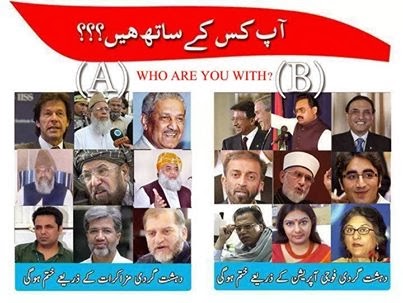 Couple of days before, one of my very respected friend who is like a mentor to me, had sent this image to myself & posted onto his Yahoo-Group, with a view that he is inclined towards group A mentioned above depicting various religious personalities in favor of dialogue with TTP. Group B is thought to be on devil's path against the right path of Islam & against any negotiation with Taliban group. This division is based on a fact that an Army operation is warranted against Pakistani Taliban (TTP) or not! Taliban past track record is open as how many accords they had violated and how they are dealing with innocent Pak Army soldiers their official organ UMAR TV is presenting it openly!

Before we get into the discussion of Army Operation against TTP or not, we will analyze the state of affairs of those who support Taliban with a view that negotiation with TTP should bring peace & prosperity in Pakistan. Any surgical operation never brings peace unless mandatory like a common man, so as the society. TTP is part of our tribal society with their traditions, culture, and own interpretations of rights & wrongs!

We should remember that the surge of Taliban in Afghanistan in early 90s was due to the fact that various moderate-religious forces including 9 religious parties alliance including Hizb e Islami of Gulbadeen Hekmatyar, who was then nominated as Prime Minister, failed to bring peace in Kabul.
Currently Taliban has waged a guerilla warfare against innocent people of Pakistan & Army with the help of many outrageous & banned factions like Sipah e Sihaba, Lashker e Jhangwi, who promote nothing but hatred against either Shais or other religious groups like Barelvis.
With this background, I am afraid that this image posted has any significance towards friends or enemies. Group A personalities sometimes acted as friends of Islam & Pakistan and sometimes behaved like enemies of Islam. Even Pervaiz Musharraf, thought to be the worst enemy of religious forces in Pakistan, was having number of religious forces in his favor during his regime! So the issue is with religious forces, not with secular forces.
Lets be frank & remember few points:
1. Maulana Sami ul Haq and Maulana Fazlur Rehamn, can't go together, hence JUI was divided, even though both belong to Deubandi school of thought, and brining forward the legacy of Maulana Abdul Haq and Mufti Mehmood!
2. Imran Khan flamboyant past is not a distant history & how he ditched Qazi Hussain Ahmed while promised to join JI & later formed his own party and supported the then dictator Gen (R) Musharraf, is recorded in history from 1999-2008.
3.Dr Qadeer Khan's financial embezzlement while in charge of Pakistan Atomic Energy project, his family's business in Dubai, frequent travels to hundreds of nations for no reason, while no one blames him for atomic proliferation (only an American stint to counter Pakistan Atomic program), but after all his mismanagement is known to everyone in Pakistan and needs no explanation.
4. Journalists who support the idea of negotiation with TTP like Talat Hussain, are few individuals. Journalist who have associations with political parties only propagate their party line with no analysis or analysis in favor of their party approach. Haroon Rashid is another example of party-linked journalist who writes everything in favor of PTI.
5. The dilemma of Jamat e Islami is that after Syed Maududi they do not even have any vision about politics and changing world! Munawar Hassan, the most respected political leader of our time, has termed those fighting against Pakistan or its Army, as martyrs. This has angered whole nation. Peer Pagara once said, 'we need Shariat but not Mansoora brand', indicated that how people are allergic with the explanation of Islam, which JI presents today! None of Pakistani, even secular forces forced to adopt Islam in Pakistan, is against Shariah implementation if it covers elimination of Riba (interest), eradication of obscenity, fashion shows, intermixing of male & females to root out moral crimes against females, upholding our moral values, and a crime-free society where every Pakistani could live his life as per the guidance of Holy Quran & Sunnah, rather than sticking to one sect interpretation of Quran & Sunnah and rejecting other views blindly!
6. Another tragedy of JI is that they look at Osama Bin Laden as an Islamic hero like Sultan Salahuddin Ayyoubi, whereas OBL had not done anything good for Islamization in Pakistan except financial support for Operation Midnight Jackal (Major (R) Aamir was the main player then, now he is part of Govt setup committee who is dealing with TTP negotiation) to topple Benazir Bhutto's govt, so he is not favored by majority!
7. The religious forces of Pakistan are doing nothing but propagating their own version of Islam or Fiqah against each other. What Deubandi & Barelvi religious scholars had done with Syed Maududi in recent past, is all available and un deniable, is a small example as how a person is treated among traditional religious circles, if he does not hold studies of Dars e Nizami! Another example is also known - under Govt sponsored Seerat Conferences, many religious scholars, of various sects, try to avoid praying behind each other!
8. Terrorism is on rise through religious warring factions against each other. How many had been killed by Lashker e Jhangwi (Sunni group) or Sipah e Muhammad (Shia terrorists faction fighting against Sunnis), is known to us. From where Maulana Mohd Ahmed earns benefits, Auragzeb Farooqi knows better, so as he drives a land cruiser in Karachi and his tax return shows zero. This is the state of our religious forces! In short, our religious forces has no link with Holy Prophet, sallahu alyhay wassallum, if so then what we can expect from Allah!
In this environment, what one can expect from dictators like Musharraf, or political traitors like Altaf Hussain, who had hijacked Karachi since 1984 and thousands killed due to his revengeful nature. If Hassan Nisar secular thoughts are thriving, then this is due to the fact that religious forces are also not upright or not following the right foot-marks (just remember how Khalid bin Waleed (R) was dismissed by Hazrat Umar (R) during a course of Jihad right in the battle field and was brought to Madina with tied hands by Hazrat Bilal (R)). If Zardari & Bilawal are getting enough support in the name of Sindhi nationalism, then what religious forces had done in Sindh for the welfare of Sindhi nation. If Asima Jahanger is successful in dealing with women rights then it means that none from religious circles had given thought to support depressed women community. If Tahir ul Qadri can get hold of Islamabad with his followers then this means that we are divided into sects and one sect dose not care about other, but look at their own motives. Isn't it????